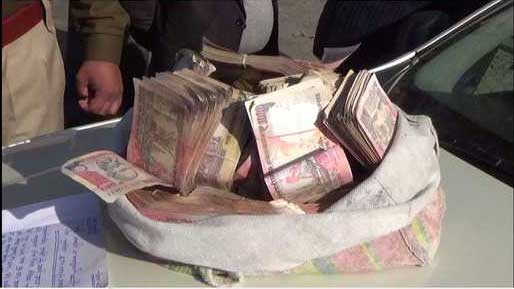 On Sunday, Dalhousie police in Chamba district recovered over Rs 24 lakh in the denomination of Rs 500 and Rs 1,000 notes from two luxury cars at Banikhet toll tax barrier. The currency was seized from a two Renault Duster cars, one having Himachal registration and the other car bearing Punjab registration number.

Policemen intercepted the vehicle in the afternoon at a special nakka on the Chamba- Pathankot national highway, 8 km from Dalhousie town. DSP, Headquarters, Chamba and a spokesman of district police Vir Bahadur Rana confirmed the seizure and said that the currency was concealed in a bag in the car boot.

The DSP told that the occupants of the first car were identified as Jaswinder Singh and Manjit Singh, both residents of Chamba town. They were travelling from Chamba to Pathankot. Total value of the currency recovered from their car was Rs 21.29 lakhs. “They couldn’t produce relevant papers or explain the source,” said the DSP.

The police also recovered Rs 2.85 lakh from another car. The driver of the car has been identified as Rakesh Bahal, a resident of Amritsar in Punjab. He was on the way from Chamba to Pathankot and claimed himself to be a cloth trader. He couldn’t produce papers related to currency. “We have seized the vehicles and also the cash and informed income tax authorities and Enforcement Directorate (ED),” said DSP.

The occupants of the two vehicles have been told to show the documents and explain the source of the money to the Central agencies, he added.

This was the second big seizure in the state after demonetisation of high –value currency notes.

Meanwhile, banks and ATMs on weekend witnessed more chaos and even longer queues as cash-starved people jostled to exchange and withdraw money. Long serpentine queues were witnessed at bank branches for the third straight day in Dharamsala and McLeodganj. To add to the misery most of the ATMs in the two towns remain non-functional. The two ATMs of State Bank of India (SBI) and one ATM of Oriental Bank of Commerce in main market of Dharamsala, which were opened in the morning, ran out of cash in few hours.
“I visited almost every ATM in the town but most of them shut. A few ATMs which are functional have a long queue of customers,” said Rakesh Sharma, a local resident who has been trying his luck at ATMs for the past three days.

The worst sufferers are the foreign tourists, who have no bank accounts here and rely on ATMs to withdraw cash. Besides, the labour class is also facing difficulties as their payments have been delayed.

Earlier this week, 76 Lakhs of banned currency notes were recoved in Sundernagar from a Fortuner vehicle.

Apple business makes a promising start amid fears in Himachal

70 tourists sent back from Kullu

Chaos at Shoghi as travellers queue up to enter Shimla

Gondhla Fort – Only one fort in Lahaul and Spiti